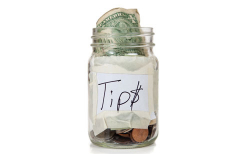 In light of the tip pooling provisions in the Consolidated Appropriations Act (CAA), the Department of Labor’s Wage and Hour Division (WHD) has issued a Field Assistance Bulletin (FAB) to address the WHD’s enforcement of tip credit rules under the Fair Labor Standards Act (FLSA). FAB 2018-3 explains the requirements of the FLSA as modified by the CAA (H.R. 1625). The WHD has also released a fact sheet that explains the same requirements.

Tip pooling controversy. As revised in 2011, the WHD’s tip pool regulation prohibits an employer from including non-tipped staff in tip pools even when it does not take the tip credit but instead pays the full statutory minimum wage. In December 2017, the Trump Administration’s Labor Department published a new proposed rule. Under the new proposal, employers would be permitted to utilize mandatory tip-pools that include employees who do not traditionally receive direct tips. The proposal would apply only to employers that pay a full minimum wage and do not take a tip credit. The proposed rule would not change the rules as applied to employers that do take the tip credit. If a tip credit is taken, then the sharing of tips between tipped and non-tipped employees is still prohibited.

The new proposal, however, contained what was benignly considered a "loophole," under which employers would be able to pocket perhaps billions of dollars in employee tips annually. A less benign storyline surfaced when Bloomberg Law reported that the DOL purportedly intentionally omitted key data from its new rulemaking on tip pools—data supporting the notion that under the current proposal, employers would indeed pocket tips instead of distributing them to other workers.

In a January 22 letter, House Democratic committee and caucus leaders had also pressed Labor Secretary Alexander Acosta to hold public hearings on the proposed rule that was said to permit "employers to pocket tips of workers who are paid at least the minimum wage," as they put it. Among other things, the Democratic lawmakers also pointed to an analysis by the Economic Policy Institute finding that the rule could have the effect of letting employers "pocket" up to $5.8 billion of their employees’ tips annually.

Tip rule fix. After persistent pressure by Senator Patty Murray (D-Wash.) and other Democratic lawmakers, the National Restaurant Association, and other stakeholders, a deal was reached to amend the FLSA via the CAA to address these concerns, under which employers would be barred from pocketing tips and be liable for doing so.

As the DOL notes in its press release about FAB 2018-3, workplaces may now establish tip pooling arrangements between "front of the house" and "back of the house" staff, such as cooks and dishwashers. The CAA also vacated the WHD’s 2011 regulations that barred tip pooling when employers pay tipped employees at least the full federal minimum wage.

The federal agency also pointed out that for the first time, Congress has given the DOL authority to prevent employers from taking employees’ tips in all circumstances. The department attributed the enactment of the FLSA amendments in the CAA to a bipartisan response to Acosta’s testimony at the House Appropriations Subcommittee on Labor, Health and Human Services, and Related Agencies, saying that he would support a law barring employers from taking tips.

Protections. FAB 2018-3 confirms that employers who pay the full federal minimum wage may now allow non-traditionally tipped workers, such as cooks and dishwashers, to participate in tip pools. The FAB also confirms that the WHD will immediately begin using new enforcement tools to protect American workers’ tips—including by recovering all tips unlawfully kept by employers, and imposing liquidated damages and civil monetary penalties as appropriate.

HEC has updated its Families First Coronavirus Response Act resources to reflect the revisions to the regulations, effective Sept. 16.