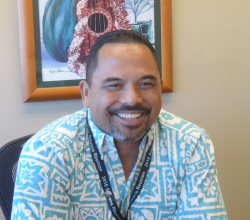 This column of Kūlia i Ka Nuʻu features Dean Kapoi, Manager Hawaii Terminals and Labor Relations at Matson Terminals.  Dean was born and raised in Waianae and is a proud graduate of Waianae High School.  He attended Long Beach State University and received a degree in Industrial Engineering.

Dayna Kamimura-Ching of HEC interviewed Dean in his Matson office.  Dean’s meticulously neat workspace has a few carefully-selected items of decoration, two of which proudly display his beloved alma mater – one is a wood block with “Seariders” prominently written across it; the other is a photograph on canvas he bought in an auction to support the school – a stunning panoramic view of the Seariders’ football field with waves crashing just yards away from the sideline.  His work boots are neatly placed on the side wall – a habit he learned from his dad.  Dean attributes his strong work ethic to his dad and Searider Football, but he is equally grateful for the mentors in his life who helped him realize the importance of balancing his career with spending time with his family.

How did you get from an Engineering degree to your current position?

I thought I was going to work in the manufacturing industry in California, but I came home in the early ‘90s because of the recession.  I started working at Hawaiian Cement in the lab, where I was able to apply some of the science I learned in college.  Because of downsizing in the late ‘90s, I was laid off in 1997.

Hawaiian Electric owned Young Brothers at the time, so when Young Brothers had an opening for a labor relations specialist in 1999, I applied.  I spent the better part of 16 years in a variety of roles to include leading the Human Resources and Labor Relations department at the end of my career there.

Matson was a customer of Young Brothers so I had built relationships with the people at Matson.  In 2017, Matson was looking for someone to fill the role I am in today, so I applied.

Matson is one of the most recognizable companies in the State of Hawaii.  When you’re on the road, you see the Matson Container with the “t” as the anchor – a lot of people don’t realize that.  It’s a well-run, local organization headquartered in Hawaii.  From the leadership down, we have the right leaders.  As far as a philanthropic perspective, Matson touches a lot of organizations in Hawaii.  I’m very proud of it.  When you look for opportunities, that’s the type of company you look at.

How would you describe your current role at Matson?

My current role is sort of a hybrid – taking from my experience at Young Brothers where I had a lot of years in human resources and labor relations and I also spent about 1/3 of my career there in operations.  That’s the experience I bring to my role here.  I have the ability to support Matson Terminals with their operational initiatives; I bring fresh eyes to an operation.  And I can support Matson with my labor relations experience and relationships.  The contracts are different, but I’m familiar with the process, so I can support them – hitting the ground jogging.

You clearly have a very busy work schedule.  Do you have any secrets to managing your time effectively and efficiently?

I’m extremely neat.  I don’t like physical noise, so I keep my workspace very neat.  I don’t know if it’s the engineer in me; it’s the binary way – things are zeroes and ones in my world.  I don’t like grey.  So by doing that, I set the stage, and my stage is the platform on which I deal with my day.  I’m the guy that washes the dishes and cleans the sink before I cook.  I try to be as organized and logical as I can, so there’s no excuses about clutter or losing things.

What is the best piece of career advice you have received so far?

The most meaningful career advice I ever got was when I was at Hawaiian Electric – a senior operations guy told me that your career is a means to an end, so you better spend time with your family.  He saw that I had a lot of drive to do what I had to do to make things happen at work.  I had the mindset to work hard and opportunities come.  He told me, nobody says “I wish I would have attended one more meeting.”

That was in 1998.  It was good advice then; it’s still good advice now.  You get good advice all the time . . . when do you follow the good advice?  I didn’t have work-life balance for a good part of my career.  I struggled with it for a long time.  It took me 10-15 years to figure it out.

I have a better work-life balance now.  I travel a lot more now – I have two kids in college.  A good friend told me, you only get one round in this life.  I wish I had learned it earlier – you can’t get that time back.

Do you think it’s important for people to get a mentor?

I do.  You can learn the good and the bad.  You can bounce stuff off of them.  They’ve been through what you’re going through.  If they lead you right, sometimes they let you fall.  My former boss and mentor, Bill Chung, who has since passed, told me on my second day on the job at Young Brothers, “You gotta let me know when you’re gonna jump.  Sometimes I won’t let you jump because I know you’re going to get hurt, but sometimes I’ll let you jump because I’ll know where to find you.  You’re going to make mistakes, but you need to make them to learn.  If I protect you from your mistakes, you’re never gonna learn.”  He probably knew I was going to fall, but he knew I would recover from it.  He allowed me to go through the experience.

What would you look for in a mentor?

Look for those who are successful in the field and doing it the right way.  There are a lot of successful people doing it the wrong way, and you don’t want to follow that.

What do you think makes someone a good leader?

Somebody who will be brutally honest with you.  When there’s honesty, there’s trust, and when there’s trust, there’s the ability to build a relationship.  A leader also needs to be able to be a follower at certain times in his or her career.

What is something you are proud of, but don’t have an excuse to talk about?

I am proud to be from Waianae and not just Waianae, but Waianae High School.  There are a lot of successful people from Waianae that don’t get enough recognition in the community.  I’m proud to be a Searider and proud of playing football.  It taught me a lot – it’s blazing hot and the ocean is right there.  You make sacrifices, you work hard, and you get a reward.  But it ‘aint about the little medal you get for being an OIA champ.  You played for the community.  It gave you purpose.  Success on that field has led to success in our lives.  Football, along with my dad, taught me about discipline and what hard work can bring.

Can you talk a little bit about how you see the future of Human Resources and/or Labor Relations?

HR will become more and more difficult.  The laws and protections, while good in intent, are very complicated—too complicated.

Also, some leaders don’t understand or appreciate the new workforce – I’m not going to say millennials – people overuse that term.  Newer employees are gonna want things that the tenured employees don’t necessarily value.  Some people are stuck on the belief that you have to be here 9-5 and do it the way they did it.  But you know what?  When they decided not to wear a white shirt and tie to work, they were “out there” to the generation before them.  I think it’s always been an issue.

What do you think employers can do to address this issue?

I think you first need to understand where the majority of your workforce demographic is – are they millennials?  Gen Xers?  And as important, where are your future employees going to come from?

The only way to address the concerns of those that you don’t know is to learn what makes them tick, what gets them going, and what causes them to work.  Or hire management teams that can manage that workforce.  You need to hire the talent to manage your talent.  Then you have to release control to the managers that you’ve employed to relate to your working population.  Make clear the deliverable and let them manage the day-to-day operations.  At the end of the day, I care that they’re ethical, safe, and they produce.

I go back to football.  Coach the personalities of the team.  You can’t force a square peg into a round hole.

Release the control.  Know your employees and hire people who can effectively manage.

Do you have any other words of wisdom or final thoughts you want to share?