KÅ«lia i Ka NuÊ»u: Trevor Bracher at Marriott â Inspiring Others to Be Their Best 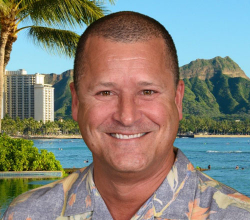 Growing up in a small town named Grimsby in Ontario, Canada, he learned an early lesson from his mother to just try everything, as this was her only rule.  “How do you know you don’t like something if you don’t try it?”  This encouragement for exploration led Trevor to try many jobs within the hospitality industry before settling on a career in HR, first in Canada and now in Hawaii.

How did you become interested in the hospitality industry?

While I was studying law at a university in Northern Ontario, I discovered I needed to earn money to pay for things like food and telephone.  I had already learned my lesson in doing laundry – the first load came out blue and the second load came out pink.  While walking downtown, I noticed the local Holiday Inn was looking for banquet porters.  So I walked in and applied.

When I became a banquet porter, the hospitality bug bit me.  The job allowed me to work at night and attend school during the day.  My career began to grow as I worked through various positions such as banquet server, banquet bartender, room service, coffee shop, dining room, front desk, and night audit.

You did a variety of jobs at the Holiday Inn, but none were in HR.   How did you get into HR?

Once I made a serious commitment to hospitality as a career, I joined Canadian Pacific Hotels and worked at a downtown property as a concierge, overseeing the bell and door departments.  After six months, I was offered a finance position in the accounting department as an income auditor and chief cashier.  At the time, I thought, “Oh my God.  I failed grade 11 math twice.  How am I going to go into finance?”  Those 5 years in Finance laid the foundation for my career as it continued to develop.  I knew that I was destined for Human Resources as the function wasn’t as important as the people I was supporting.  I created special award programs for associates to encourage them to balance.  After all, Finance is more than numbers.  People needed to feel that they were being encouraged to participate in a positive way.

My experience in the finance department led me to become the payroll human resources coordinator at one of our sister properties called the SkyDome Hotel in Downtown Toronto, Ontario.  I did that for 2 ½ years before moving over to the 1450 room Royal York Hotel, now part of the Fairmont family.  I narrowed my focus to just Human Resources as their HR Administrator before taking over the recruiting function for the property.  30 years later I still enjoy the world of Human Resources.

What would you say are your strengths?

I can read people well and I sometimes believe that I can sense what they are feeling.  I have the ability to help them peel back the onion to help them understand what they are searching for, help clarify things for them, or give them the stage to express what’s bothering them.

I care about the people I work with and I want them to feel good about themselves.  As a leader, if I’m not inspiring them and motivating them to do great things, then what am I here for?  Some people just need permission, some people need a little encouragement, some people need someone to say, “Hey, get off that butt and get going.”  It is my role to motivate you, encourage you, push you off that stool, or whatever it takes for you to feel comfortable and confident with yourself.

What’s the most rewarding part of your job?

The most rewarding part of my job is when my team succeeds.  When the teams come together and the hotels work as one, they can accomplish so much more as a combined unit than individual entities.

For instance, each year we exceed our diversity and inclusion goals as we create places for diverse leaders to thrive and grow.  We recognize that different viewpoints and ideas have a positive business impact.  By harnessing those differences, you can gain a competitive edge and be incredibly successful.

If we only hired likeminded people as ourselves, we would end up with multiple versions of the same perspective and that will never allow you, your team and your business to grow.

How did you get your team comfortable with change?

We kept the change model on the wall and discussed where we were.  If everyone said they were comfortable, I asked, “What was the last thing you learned?”  If you’re always comfortable, you’re not always learning as much as you could be.

In addition to getting uncomfortable, I also set the stage that failure is nothing to fear.  It is simply feedback. Now you know what not to do.  If you’re going to fail, fail big because there’s even more to learn.

As a leader, when someone on your team fails and they already know they’ve made a mistake, why throw sand in their face?  They get it.  Instead, work with them to get out of the hole and create a win / win for all involved.

What is the most challenging part of your job?

Accountability.  Making sure our department heads and team leaders and our associates are accountable for the things they do.  Our industry moves incredibly fast and sometimes we have taken the approach that finished is better than perfect.  Solid plans, timelines and clear expectations make for a more cohesive and highly productive team.

Our Managers work incredibly hard and a thank you goes a long way.  If you don’t slow it down and have those regular communication sessions with your teams you could burn out or miss valuable information that will help you become even stronger leaders.  Without involving your teams and making sure that we communicate, you start seeing evidence of lost productivity, things not being done, breakage, higher absenteeism, and more turnover.  All of those things are very symptomatic of larger problems in your workplace.  You have to ask yourself as a leader, “What am I missing here?  What am I not encouraging?  How am I not providing the support to the most amazing people that are running and doing incredible things for us?”

It’s easy to create a beautiful recognition program but the reality is people just want to be thanked.  They just want to be shown some appreciation once in a while. Recognize them when they’ve done a great job, and don’t wait until the end of the year during a performance evaluation to give constructive feedback.  Feedback should be consistent and in the moment.

Did you have any mentors?

Irma Andaya, a woman who came from the Philippines and started as a room attendant and made her way to the HR Director of L’Hotel in Ontario, Canada, believed in me.  For instance, when she interviewed me for the Front Desk Supervisor position, she asked, “Why are you selling yourself short?  Why don’t you apply for the concierge role?  You’ve got something in you that I think will be awesome for this property.”  I did not have concierge experience and I barely knew where I was in the city, but I took the concierge job.  I knew in that moment her belief in me was just the beginning of our journey together.

Does Marriott have a mentor program?

We created a program called “Reaching our Potential,” in which we assign mentors and mentees.  I pair people with very opposite styles so they are able to share a very different perspective and when the questions come up, they can share their experiences.  Mentoring is not always about having the right answers.  But it’s about having really good thought-provoking questions.

Do you have a favorite quote?

You could hammer a nail in a stump and pull it right out, but it will leave a scar.  You have to be really careful about what you say.  People will always remember how you made them feel.  That could wreck or build relationships.

When I was the Corporate Director of Learning and Development for nine years, I did not want the audience thinking I was a great trainer at the conclusion of the training session.  Instead, I wanted them to think that they were so much better because of the training.  That, to me, is the best feeling.

Do you have any final thoughts you want to share with our readers?

I think you need to draw everything you can out of life and enjoy it to its fullest.  Time goes by so quickly now and it would be a shame to waste it.  The older you get, the faster it goes.  It feels like Aloha Friday arrives every three days. The weeks turn into months and then it is New Year’s Eve all over again.  We say to ourselves, where did that year go?  I think that if you are watching time go by, you aren’t participating in everything that life has to offer.  So instead of watching….jump in and enjoy.  I certainly have.