Termination Lawful Even Though Based on a Lie 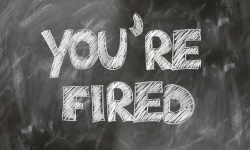 Electrolux’s termination of a union supporter was lawful according to the National Labor Relations Board (“NLRB” or “Board”) even though the stated reason for her discharge was fabricated.  Electrolux and Mason (August 2, 2019).

J’Vada Mason worked in the materials department of Electrolux Home Products, Inc.  In 2015 and 2016, Mason actively participated in union organizing drives.  In September 2016, Electrolux held a meeting to discuss its opposition to the organizing efforts of the International Brotherhood of Electrical Workers (“Union”).  At the end of the meeting, Mason stood up and challenged the anti-union statements made by Electrolux plant manager, Sebastian Gulka.  Gulka and another manager told her to “shut up.”

In October 2016, the Union was certified as the exclusive collective-bargaining representative.  Negotiations began in January 2017, and Mason served as one of six employees on the Union’s bargaining committee.

On April 28, 2017, Mason’s superior asked her to deliver microwaves to the assembly line.  Mason failed to do so.  An insubordination investigation followed, which resulted in Electrolux terminating Mason on May 5, 2017.  Mason filed a charge against Electrolux alleging that she was discharged because of her union activity, in violation of the National Labor Relations Act (“Act”).  The General Counsel issued a complaint a few months later.

Under the Wright Line analysis, the General Counsel must initially show that the employee’s union activity was a motivating factor in the employer’s decision to discharge the employee.  The burden of persuasion then shifts to the employer to demonstrate that it would have taken the same adverse action even in the absence of the employee’s protected conduct.  According to the Board, “when the [employer]’s stated reasons for its decision are found to be pretextual—that is, false or not in fact relied upon—discriminatory motive may be inferred, but such an inference is not compelled.”  (Italics in original.)

Board Found Pretext, But No Other Evidence of Union Animus

The Board found that Electrolux’s stated reason for terminating Mason (insubordination) was pretextual based on evidence that Electrolux had imposed lesser discipline on several other employees who were disciplined for insubordination.  However, the Board further found that the General Counsel failed to satisfy his burden of proving that Mason’s union activity was a motivating factor in her discharge.  Rather, “[w]hen an employer has offered a pretextual reason for discharging or disciplining an alleged discriminate, the real reason might be animus against union or protected concerted activities, but then again it might not.  It is possible that the true reason might be a characteristic protected under another statute (such as the employee’s race, gender, religion, or disability), or it could be some other factor unprotected by the Act or any other law . . . .”

The Board found “no basis to infer that [Electrolux] discharged Mason because of her union activities, other than the finding of pretext.”  The September 2016 meeting in which Mason was told to “shut up” did not, according to the Board, establish that Electrolux harbored union animus, and was too remote in time (more than seven months prior to her termination) to infer the discharge was unlawfully motivated.

According to the dissent, this case “marks the first time in history the Board has declined to find a violation of the Act when there is clear reason to infer an antiunion motive and no evidence—other than hypotheses spun by the majority itself—of any other lawful motive.”  (Italics in original.)  The dissenting member, the lone Democrat, continued:  “The puzzling outcome here seems to open the door for employers to lie to the Board and get away with it.  I hope that this case is an aberration and not a sign that the majority intends to fundamentally alter the role of pretext in the Wright Line framework.”

While Electrolux prevailed in this case, employers should not assume they can “lie . . . and get away with it.”  The analysis is fact-specific and should be done on a case by case basis, so consult HEC or a legal professional if you are considering termination in a tricky situation.  Certainly, however, it demonstrates the shift to a much more employer-friendly Board.