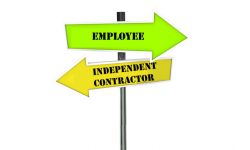 On September 22, the U.S. Department of Labor (“DOL”) issued a proposed rule to determine whether a worker is an independent contractor or employee under the federal Fair Labor Standards Act (“FLSA”). The proposed rule adopts an “economic reality” test – meaning the ultimate inquiry is whether workers, as a matter of economic reality, are in business for themselves as opposed to being economically dependent on the potential employer for work. The proposed rule would look at five distinct factors (instead of five or more overlapping factors used by most courts and the Department previously):

Although no one factor is dispositive, the first two are “core factors” that are “afforded greater weight in the analysis than any others.” The other three factors serve as “additional guideposts” in the analysis.

The proposed rule further states that actual practices are entitled to greater weight than what may be contractually or theoretically possible.

The proposed rule is available for review and public comment for 30 days after it is posted in the Federal Register.

Have you updated your policies, procedures, and handbook provisions to reflect the new laws? HEC has updated various resources on its website.