9th Circuit: Salvation Army Can Discriminate Based on Religion and End Interactive Process 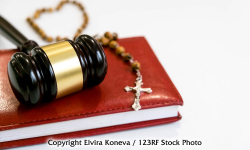 The Ninth Circuit Court of Appeals, in a published decision, held:  (1) Title VII’s religious organization exemption barred retaliation and hostile work environment claims against the Salvation Army because they were based on religious discrimination; and (2) the ADA does not require continued engagement in the interactive process in the absence of requested medical evidence.

Disability - From October to December 2013, Garcia took a medical leave due to fibromyalgia.  She then took further leave, explaining that she had been advised not to return to a stressful working environment due to health reasons.  At the Salvation Army’s request, she provided medical documentation.  In May 2014, after several extensions of her leave, Garcia’s doctor cleared her to return to work without restrictions.  Garcia, however, refused to return to work unless she was provided the “accommodation” of a copy of the 2013 complaint letter.  The Salvation Army provided a summary of the letter, but told Garcia she needed to provide medical evidence to support her disability and proposed accommodation.  Garcia did not provide medical documentation and did not report to work.  She was terminated in July 2014.  Garcia filed a second complaint with the EEOC alleging that, by declining to give her a copy of the 2013 letter, the Salvation Army failed to accommodate her disability.

Lawsuit - Garcia subsequently sued the Salvation Army under Title VII and the ADA for subjecting her to a hostile work environment because she stopped attending religious services, retaliating against her for filing a complaint of religion-based mistreatment, and failing to accommodate her resulting stress-precipitated health problems.

Garcia argued that the Religious Organization Exemption only applies to hiring and firing decisions.  The Ninth Circuit, addressing the issue for the first time, disagreed.  The Court held that because the Salvation Army is clearly a religious organization, it can discriminate in employment based on religion, and this includes all aspects of employment.  As such, Garcia’s retaliation claim based on religious discrimination failed because the practice she “opposed” was not “unlawful.”  Similarly, her hostile work environment claim failed because it too was based on religion.

Garcia also claimed that the Salvation Army failed to interact with her in good faith by refusing to provide her a copy of the 2013 complaint letter as an “accommodation.”  Her request for the letter, however, occurred after her doctor had cleared her to return to work.  The Court noted that a doctor’s release to work without restrictions supports a finding that a person no longer suffers from a disability.  Without a disability, Garcia was not entitled to the interactive process.

The Court further stated that an employer does not have a duty under the ADA to engage in further interactive processes in the absence of requested medical evidence.  The Salvation Army asked Garcia for medical evidence supporting her “accommodation” request, but she failed to provide any evidence.

Finally, the Court found that Garcia’s requested letter was not a “reasonable accommodation” under the ADA because obtaining a copy of a year-old client complaint letter was unrelated to the essential functions of her position.