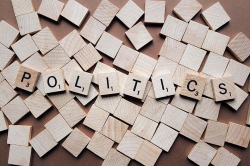 With all that has been going on in the news lately, it is difficult to prevent politically-charged issues from affecting the workplace.  When a political issue arises, employers may find themselves in the challenging position of balancing employees’ rights with ensuring a productive and respectful workplace – whether it is enforcing civility and solicitation rules or navigating religious accommodation requests.

This article addresses some common questions that may arise.  As always, however, you should consult HEC or your employment attorney to address specific situations.

Can I prohibit political speech?

Oftentimes, small disagreements can quickly escalate when topics of discussion are of personal significance to employees.  Before banning all political speech, however, employers should consider the following.

Generally, private employers can prohibit political speech in the workplace as long as such prohibitions do not violate the National Labor Relations Act (“NLRA”).  Specifically, Section 7 of the NLRA protects the rights of employees to engage in protected concerted activity in order to improve their terms and conditions of employment.  There are many issues that are political in nature that may also be protected by the NLRA (e.g., a group of employees complain they cannot participate in a protest because of their employer’s leave policy), so employers should carefully analyze whether employees’ speech constitutes protected concerted activity.

Even if employers can prohibit political speech in the workplace, they should still consider the impact such a ban could have on employees’ morale.  Additionally, rather than banning political speech specifically, employers should consider whether other “house rules” already ban inappropriate speech.  It is advisable to review your company’s handbook for policies prohibiting uncivil behavior or disorderly conduct at work, and to remind employees about these policies and the importance of maintaining respectful and civil conversations at work.

What if an employee wants to send a company-wide email soliciting donations to support a political cause?

Review your company’s solicitation and electronic communication policies, and treat political campaigning at work the same way you would treat any other solicitation, such as fundraisers for schools and charitable causes.  Any exceptions you make to your policies can open the door for other exceptions, which can become a slippery slope.

Legally speaking, employers can prohibit solicitation of employees during the working time of either the employee doing the soliciting or the employee being solicited.  Employees can also be prohibited from distributing flyers during their working time or in work areas at any time.  Employers can also prohibit use of the company email system for non-work purposes as long as it does not prohibit protected concerted activity as discussed above.

Can I restrict an employee’s political activities during off-duty time?

Employers should not take adverse action against an employee for engaging in lawful off-duty conduct, such as volunteering for a political campaign or participating in a peaceful protest.  If, however, the employee conducts him/herself inappropriately during such political activity, the employee can be disciplined for the inappropriate conduct.

Employers can also prohibit employees from holding themselves out as speaking on behalf of the company or serving as a spokesperson for the company.  For example, if an employee wants to participate in a non-work-related protest, an employer can prohibit him or her from using a company vehicle or wearing the company uniform.

Additionally, if your employee requests leave to participate in a protest or other political event, be sure you follow your company’s leave policies and apply such policies even-handedly.  If your policy would normally allow employees to use their vacation or paid time off, then they should be allowed to do so.

What if the employee is seeking time off as a religious accommodation to attend a religious protest?

Sometimes, politics and religion intersect.  An employer must reasonably accommodate an employee’s religious beliefs or practices unless it would be an undue hardship on the employer’s operation of its business.  The EEOC gives the following examples in its Compliance Manual:

A Catholic employee requests a schedule change so that he can attend church services on Good Friday. . . .  An atheist asks to be excused from the religious invocation offered at the beginning of staff meetings.  An adherent to Native American spiritual beliefs seeks unpaid leave to attend a ritual ceremony. . . .  Each of these accommodation requests relates to a “religious” belief or practice within the meaning of Title VII.  By contrast, a request for a schedule change to help set up decorations or prepare food for a church event, for instance, typically does not involve a “religious” belief or practice within the meaning of Title VII.  See, e.g., Wessling v. Kroger Co., 554 F. Supp. 548 (E.D. Mich. 1982) (court held that plaintiff, who had volunteered to arrive at Church early to set up, decorate, and receive children prior to their performance of a play during Christmas Mass, was engaging in a social and family obligation rather than a religious belief, practice, or observance).

An accommodation may cause undue hardship if it is cost-prohibitive, compromises workplace safety, decreases workplace efficiency, infringes on the rights of other employees, or requires other employees to do more than their share of potentially hazardous or burdensome work.  Employers should also note that the undue hardship standard for religious accommodations requires employers to show “more than a minimal burden,” which is a lower standard for proving undue hardship under the Americans with Disabilities Act, which is defined in that statute as “significant difficulty or expense.”

What if your employee refuses to work on a certain project because it conflicts with the employee’s religious beliefs?